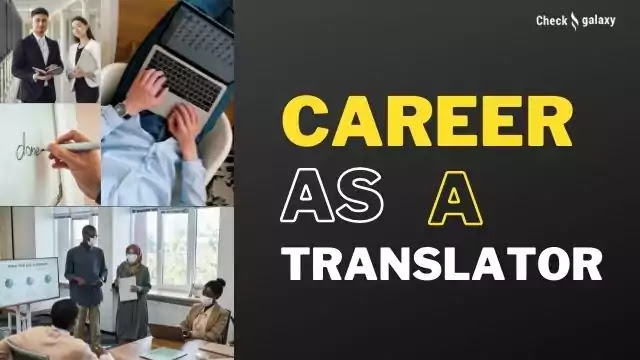 What Degree Do You Need to Be a Translator? | How to become a  without a degree

Hello friend! Welcome to our website. Today we will tell you How To Become a Translator, meaning a Career as a Translator.
We are all connected to each other through language. But what if we don’t understand each other’s language? Because it is not possible for almost all people to learn all languages. And in such a case, how can two people of different languages ​​talk to each other. Translators have the solution to this problem of language, how to share important things with each other. Because the translator is the person who converts one person’s language into information and passes it on to another person. And nowadays many types of multinational companies have come to India, and Indian companies are also starting their own business in foreign countries to grow their business. And for this reason, the job opportunity of translators in India is increasing very fast. So you need to know the process of how to become a translator. And for this today we are going to tell you the process of becoming a translator in this post. So you must read this post in full. Let’s get started and understand the process of becoming a translator.
Let us first know what skills you need to be a translator. Through which you will be eligible to become a translator.

Skills required to become a translator

The main function of the friend’s translator is to translate the text of any language to the desired language without any change. It is necessary to have good knowledge of all the languages ​​of the translator, because the role of a translator is very important, and in this case, there is no room for mistakes. At the same time, it is necessary to have good research and good communication skills.
It is not enough for a translator to have knowledge of language only, a translator needs to have knowledge of economics, scientific concept, history, law, international politics along with language knowledge. And a translator must have computer friendliness, analytics skills, and public speaking.
By this time, it seems that you have learned about the skills that translators need to have. Let us know about the eligibility criteria of a translator.

Friends, there are some popular entrance tests for language course admission –

After completing the study related to becoming a translator, many job opportunities will open up in front of you, from which you can easily start your career in the job of a translator that matches your skills and interests. Such as –
After knowing all this, then you need to know about some of the top companies that hire translator experts.

As a translator expert, you will get a salary of Rs 15000 to Rs 25000 at the beginning. But later on, your experience will increase your salary much faster.
And if you want to start your own business, as a translator you can charge Rs 50,000 for each assignment. There will be a difference in your salary on assignment and your job position. Therefore, it would be better for you to train yourself as a good and efficient translator, so that you can achieve the position and salary you want very quickly. And you can create your identity in such a big need.

We hope you understand our post How to become a translator in India We always try to give you the right information so that you do not have to go to any other website to see the same post.
It saves you time as well as getting the right information together. If you think to Can I be a translator without a degree? then this post needs any correction, you can let us know in the comment box?